I said good bye to my first child, Marianna Augusta, on March 31, 1990.  I was young and sexually assaulted at 13, resulting in a pregnancy.  Extremely sick, having fever seizures and hemorrhaging for several days, Marianna never even took a breath and was born at home.  I was 14 years old and passed out as Marianna’s lifeless body dropped in the toilet.  While I have no pictures, I don’t think I will ever forget how tiny she was.  I was rushed to the hospital where they performed emergency surgery.  My Mom was told that if she had waited any longer to bring me in, I would have died from the loss of blood.  This didn’t change my dream for a child; it only made it stronger.

I got married at 21 and we both knew we wanted children.  I got pregnant right away but lost the baby within the first trimester.  I lived several hours from my doctor and by the time I arrived at the office, my blood count was 5.5 so I was admitted to the hospital for a blood transfusion.  My body rejected the blood, but they pushed it anyway because it was so low.  Once stable, I was released and sent for IV Iron Therapy.  I had been married less than 9 months but knew my marriage was in trouble.  Infertility and child loss are both hard on a marriage.  Most don’t survive and mine fell right into that category.  We divorced and I moved home.

A little while later I met a man with two young children at church and thought it was the perfect “instant family”.  I loved being a weekend step-mom to his 1-year old daughter and 3-year old son.  They were great kids!  We married in early August and tried for over a year to get pregnant.  I had been diagnosed with Polycystic Ovarian Syndrome, (PCOS), as a teenager and it affected my menstrual cycles. We ended up going to see a reproductive endocrinologist. After lots of tests, I was put on birth control to regulate my cycles.  We had to keep a chart with my temperature to know when I was ovulating.  I was put on Clomid, a mild reproductive medication in pill form.  After a few cycles, I got pregnant. I had all the cravings.  I remember being so excited when the smell of tuna fish made me sick!  Unfortunately, that pregnancy ended in miscarriage a few months later.  I remember laying in the middle of the bed crying.  We continued to try for a couple years to get pregnant, but it didn’t work.  I got depressed and he got stressed and strayed.  We went our separate ways.

At this point I was 25 years old and I made the decision that if I were not married or if there were no “Daddy” prospects in my future, then I would be artificially inseminated with donor sperm when I turned 27.  I still laugh every time I think back on this.

I met Husband #3 and we hit it off great.  We decided not to rush into marriage or kids, but then I started having some medical issues.  We went straight to a Reproductive Endocrinologist.  After more tests and exploratory surgeries to remove scar tissue, we were put on Gonal-F, an injection that is given several times daily to help with infertility.  The downside of this medication is it causes multiple births, so you must go into the doctor daily for ultrasounds to make sure you are not hyperstimulated.  Of course, I would be one of those rare cases that was!  At one visit, I remember having the ultrasound and being amazed at all the follicles on the screen.  A follicle is the sac that releases the egg for fertilization.  The month I was hyperstimulated, I had 23 follicles!

I called my mother-in-law and told her.  I will never forget her response.  She said, “I told you I want 3 babies, not 23!”  To know I was carrying around the possibility of that many babies was a lot of responsibility!  I was put on bed rest to protect me and the follicles, having high fevers, nausea, vomiting and severe abdominal pain.  I had to be monitored and not left alone, so when my husband and his family went to a Braves game, I stayed with my Mom.  This very painful cycle did not result in a pregnancy!  I was devastated but not ready to give up!

During all of this, his grandmother found out we were doing fertility treatments and said “You need to be married if you are trying to get pregnant” so we started planning a wedding amidst all chaos of trying to get pregnant.  I still remember pulling out that dreaded needle every time my alarm went off to do that injection.  We were married in February 2002.
Robert Felder (“Robby”) was born sleeping on Mother’s Day, May 12, 2002.  It had not been an easy pregnancy and we had not told many people we were pregnant.  I was flying in from visiting family when I lost him.  I never got to hold either of my angels.  I knew at this point I was done trying.  I couldn’t go through the agony of losing another child.  I was officially diagnosed as a Habitual Aborter.  I had no problem getting pregnant; I just couldn’t keep it because my body rejects pregnancy.  To please my mother-in-law, we got a second opinion and he agreed with my original doctor.  There was nothing they could do since I couldn’t carry a baby to term.  With PCOS, eggs are not allowed to be released from the follicles.  Because of my PCOS, I was scheduled to have a complete hysterectomy on October 17, 2002; I was only 27 years old.  This is when it was discovered that I had Endometriosis as well. 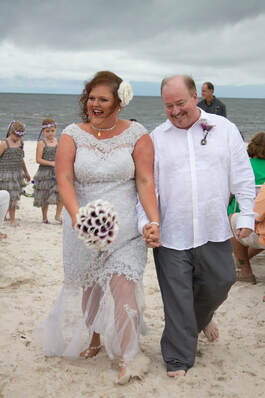 ​I remarried in 2017 and as I was sewing over 3000 pearls on my wedding gown, I decided I wanted to sew burial gowns again.  The next day, my husband-to-be came home with a new sewing machine and Southern Grace Angelic Gowns, (SGAG), was born!  Now, we are a 501c3 nonprofit, sending burial gowns all over the country and overseas!  We transform donated wedding dresses into burial garments, known as Angelic Gowns, for babies that are stillborn or die shortly after birth.  All gowns are donated to grieving families at no charge.  I have my wedding dress in the closet and once I take pictures of my sweet rainbow Hannah wearing it, we will cut it up for Angelic Gowns as well. (You can read about Hannah in the “In the News tab”)